In searching for information about one of our authors (Anastatia Hogan), I had occasion to go through a collection of texts by William Arthur Deacon, an eminent Canadian literary critic of the early twentieth century. I found reference to Anastatia in only one of his books (The Four Jameses), but did uncover a couple of other interesting tidbits. One is the appearance of two lists of titles at the end of Poteen: A Pot-Pourri of Canadian Essays (1926) (which, interestingly, was first copyrighted by the author in the USA in 1925, but copyrighted in Canada and published in Ottawa in 1926, but that is another story…). The first list in Poteen is “representative of Canadian literary achievement,” containing books by those authors W.A. Deacon considered important in 1926, but is “limited to books which are reasonably credible and still in print” (221). The second is a list of authors whose poems are included in a number of collections published at the time. (Perhaps this isn’t as interesting to others as it is to me, but let it be said that I have compiled an (incomplete) comparable list that I keep in an Excel spreadsheet.) In our entries for individual authors, we have included Deacon’s collection of collections, but Deacon has actually indexed all of the authors, male and female, in the following titles: (Note, though, that the editors’ names, editions, and publication dates don’t always correspond with the published texts I have held in my hands).

Watson, Albert Durrant, and Lorne Pierce, eds. Our Canadian Literature: Representative Verse, English and French (Toronto: Ryerson, 1922). [Deacon has “Watson-Pierce, Our Can Lit., 3rd ed., 1923”; the 3rd edition was actually edited by Bliss Carman and Lorne Pierce, and published in 1934.]

My list, compiled so I could determine which authors were out of copyright, and thereby know which titles I could share on our blog, includes (so far) the following titles:

“Book-List” and “Where Canadian Poets May Be Found”

Here are the pages, and the searchable pdf, from Deacon’s pot-pourri. 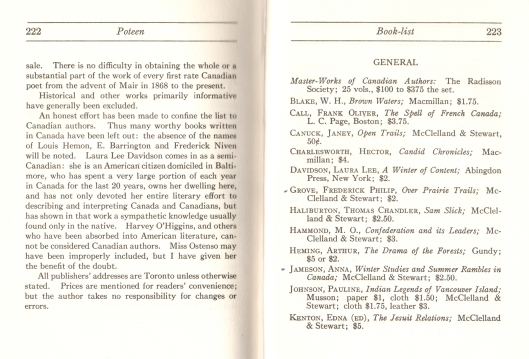 1 thought on “Some lists from Poteen: A Pot-pourri of Canadian Essays (1926), by William Arthur Deacon”