Another enigma… Audrey MacLeod published Faggots for the Fire with Macmillan in Toronto in 1933. She does not appear in our SFU database, because we can find no biographical information about her. Our yellowing notes have Walkerton, Ontario, as her place of residence in 1933, as well as New York City with no date assigned. She was apparently a speaker at events in New York in 1931 and 1932, but that is all we have. Her poems are under-signed with the following: “Little Church Around the Corner, New York,” “Tempered ‘Neath an Alien Roof, New York City” (which might suggest she was not American), “St. Patrick’s Cathedral, New York City,” “Ridgewood, N.J., Where Oak Trees Are,” “Grand Central Station, New York City,” “October, New Canaan, Conn.,” “On-the-Hudson, at Harmon,” “Georgian Bay, Canada,” “Round about Storm King Mountain, On-the-Hudson,” “‘Sacre Coeur’, Montmartrê, Paris” [sic], “‘Flower Show’, New York City,” “Park East Hospital, New York City,”  “To Gertrude Wilkes, Havergal College, Toronto,” “From a Pullman Window,” “In England,” “In the Cathedral, At Chartre, in France” [sic], and “British West Indies.”

“Bliss Carman” was written after the author did in fact spend time visiting with Carman at his home (“Sunshine House”) in New Canaan, Connecticut, where he had “spent at least part of every year since 1897” (DCB). MacLeod’s collection was published in 1933; Carman died in in New Canaan in June of 1929, so this meeting of poets would have been earlier, but still towards the end of life for “the bard who was growing old.”

How can one resist a title like The Robot Detective, written in 1932, when robots were so de la mode? Karel Čapek’s play R.U.R. [Rossum’s Universal Robots] was first produced in 1921, and translated into English in 1923, introducing the term robot to the English language and spawning a flood of fiction featuring these new, intriguing but threatening machines. By 1932, one would hope that authors had managed to incorporate robots into their fiction in a scientifically meaningful way, and where better to employ the mechanical brainpower of a robotic intelligence than in criminal detection? Mabel Broughton Billett was certainly aware of the concept of robotic technology, but not of the science. Her “robot detective” incorporates punch-card technology and a mechanical analysis machine, but with less than satisfactory results.

Punch-card technology was first used by Joseph-Marie Jacquard, of weaving fame, in France in the very early 1800s, and was a well-known technology by the 1890s. The first mechanical analysis machine, which ultimately became known as “The Difference Engine,” was described by a German scientist, Johann H. von Müller in 1786, but never fully designed. In 1822, British Charles Babbage took up the project, and by the 1860s a number of scientists, both British and German, had produced plans and prototypes of mechanical analytic machines: the precursors of modern-day computers. Thus began the literary interest in “thinking machines,” an interest that Billett obviously was aware of and exploited in The Robot Detective. What is most troubling about her use of robotic technology, though, is that her robot does not actually do anything. Her detective, retired police officer Major Michael Kettlewell, feeds his hand-written biographical cards into the computer, which discusses the case with him; he then runs away and solves the crime. There is no obvious output from the machine that facilitates his investigation. Billett is explicit–repeatedly so–in noting that his “robot detective” is based on “the German ‘Meldwesen’, the great man-hunting Robot of Berlin” (52), which as far as I can determine did not exist. Given the extremely peripheral involvement of the detecting machine in the solution of Billett’s crime, The Robot Detective is, as a science fiction novel, rather a failure. As a detective novel, however, it is a bit stronger.

The story centres around a double murder committed in the peaceful, independent town of Glenlogan in the interior of British Columbia in the early 1930s. Glenlogan has a “tourist park” that houses itinerant workers and travellers, and the most obvious suspect in the crime is an “Aussie who has been sleeping in the tourist park for the last two weeks” (24).  Billett spins her tale well, leaving us aware of whom to suspect, but without ample evidence to convict in our minds until all is revealed in the final scenes. Unlike Agatha Christie, though, Billett’s scenes are not set in a parlour but in the hills of the Nicola Valley and a hidden inlet on Vancouver Island. Herein lies the greatest interest in the novel for me, personally: the landscape.

When the Aussie is first suspected, Major Kettlewell and his mandatory sidekick Sergeant Whitehead discuss the possibilities of the Aussie’s exit from the valley:

“There are only three ways he can get out of the valley.”
“Yes, sir. And if he had taken the Nicola road he would have met the stage … he couldn’t use the lake road at night … And he hasn’t gone through Kamloops by day, nor been seen at any point on the Fraser highway.”
“Have you wired Grand Prairie?”
“Yes, sir. He’s not been there.”
“Princeton?”
“No sign of him in Princeton, sir.”  (25)

I don’t think there is a reference to Princeton, BC, in any other fictional work; imagine the joy of finding your little nothing of a town thus immortalized!  And Princeton is not alone. The novel is cholk full of references to small British Columbia towns–many of which no longer exist–that were part of my (and many others’) youth and heritage. How could I resist being immersed in a novel that took place in the ghost towns of my youth before they were peopled only by ghosts?

Later in the novel, the antagonist gives his cronies the slip and “walking back to Granite Creek with his wife, had flagged the train” to escape with the loot (285).

Granite Creek (which I knew as “Granite City”) is a small settlement about half a mile from the larger but still minuscule settlement of Coalmont, BC (current population about 100). In the 1980s, there were still a few derelict cabins and the wall of a hotel standing. Now there is nothing. But the site is still part of British Columbia mining history; I myself have gold dust from Granite Creek, panned with my father when I was young. In 1932, Granite Creek was a destination that British Columbia readers would have recognized. They would have been able to situate the fictional Glenlogan, 52 miles from Princeton (284) –as far as I can tell, near current-day Merritt–within the real valleys that Billett uses as her setting. Towns like Grand Prairie, Brookmere, Allison, and Dot… are all real communities that few people today recognize. The setting, far more than the plot or the technological elements, makes Billett’s The Robot Detective worth reading and remembering. 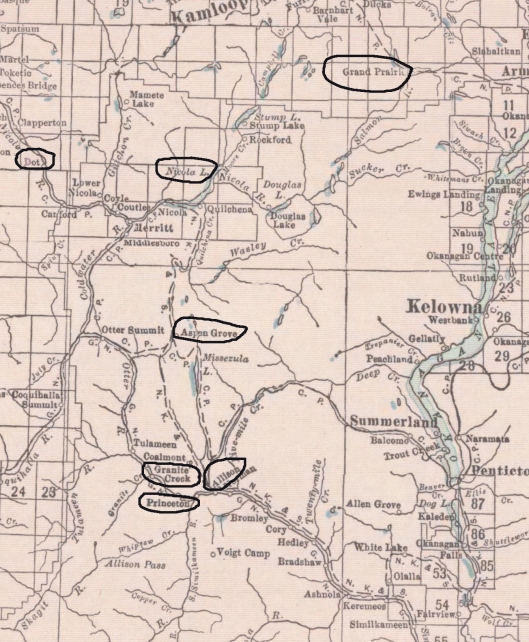 “The Bridge” was the first poem to win the Donald G. French Memorial Award for Poetry. A number of our authors won this award or placed in the running, but neither the poems nor the titles of the secondary winners were published in the Canadian Poetry Magazine award announcements.

Connecting my love of early Canadian literature with my love of children’s literature, I have been reading through the children’s texts written by some of our authors, with the intent of sharing them—if only superficially—with others. The first such text was The Bells on Finland Street (1950), by Lyn Cook.

In 1892, Margaret Marshall Saunders entered a competition for the Humane Society of New England that requested stories to support their cause. One of the requirements was that the books be set, naturally enough, in New England, so the story that the Nova Scotian author produced is now claimed as both an American (by nature of the setting) and Canadian (by nature of the author’s nationality) children’s classic. Beautiful Joe not only won Saunders the $200 in prize money, but became the first Canadian novel to sell over one million copies. Beautiful Joe (1893) is considered by many to be the North American Black Beauty (1877), the tale of an animal who suffers under the cruelty of humans and is then taken into a more loving, humane household.

One of the most interesting aspects of Beautiful Joe—as a story—is its enduring resonance with its transnational readership. Numerous and diverse editions of the story have been produced in order to sanitize (bowdlerize, in my opinion) the story in order to render it more in keeping with changing sensibilities regarding depictions of cruelty to animals, especially for younger readers. The early editions are most effective

in revealing the hardships animals suffered at the hands of humans, and fuelled the burgeoning support for Humane Societies in the United States and Canada: not only the SPCA and the RSPCA, but organizations such as the Beautiful Joe Heritage Society, a more modern response to the effectiveness of Saunders’s narrative appeal.

The story itself is predictable, following the episodic structure of Black Beauty and other tales of moral righteousness (Little Women [1868-69] springs also to mind). Like Black Beauty, Beautiful Joe tells his own tale: the life of a dog, from the horse’s mouth, as it were. Beautiful Joe was abused by his owner, Jenkins: his siblings are killed by being dashed against a wall and his mother, traumatized, succumbs to grief. Angered at her death, Joe attacks his master: as a result, his ears and tail are inexpertly and cruelly cropped. Enter the guardian angel in the form of Harry, cousin to the Morris children, who take him in and give him a loving home. The first, horrific chapter of his life is short; the remainder of the book has Beautiful Joe—so-called to make him feel his ugliness less—as a beloved and well-treated pet. The family are adamant—even at times radical—Animal Rights activists, and the episodes Beautiful Joe relates tell other animals’ tales of woe and survival, no longer his own.

If you liked Black Beauty, you will almost certainly like Beautiful Joe, for Saunders strikes an effective balance between animal and human sensibilities. For a myriad of reasons—content, style, publication history, and social context—it deserves its place as a classic of Canadian children’s literature. 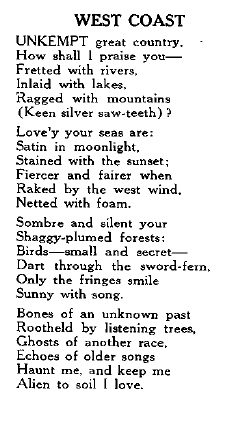 Yetta Bernstein contributed both poem and drawing to the Toronto Globe‘s “Circle of Young Canada” section, from which the selections in Creative Young Canada are taken. In this case, it seems that the poem is more an adornment to the illustration than the other way around. “Yetta,” as she signed herself, also contributed illustrations to decorate others’ poems in the collection.