Another contribution to the Winnipeg Free Press Young Authors’ Section, established to publish “contributions by young people from the age of 13 years and upwards.” A remarkable number of later-to-be well-known poets started their days in these pages.

“Poet’s Corner” editor W.E.I. comments on Marian Waldman’s “flooding inspiration” in this and other poems previously submitted to the page.

This poem was first published in the “Circle of Young Canada” section of the Toronto Globe between 1918 and 1928. “Circle of Young Canada” was an introductory venue for a number of well-known poets such as Mona Gould, Margaret Avison, and Marjorie Pickthall. “The Dawning” shows a marked Modernist sensibility; it would be interesting to know what became of Dorothy Locke, and whether she published anything further. 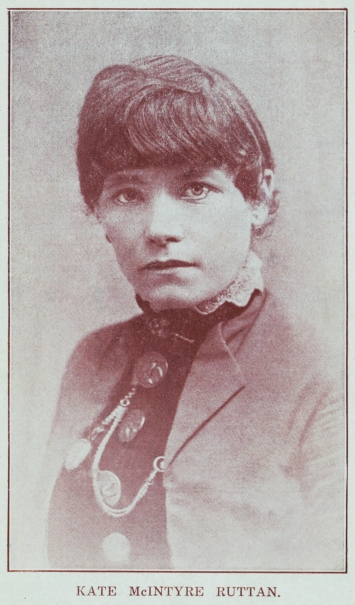 A bit about the poet

Kate McIntyre Ruttan (1855-1928) was a rather interesting if not highly talented poet, one of three women chosen by William Arthur Deacon for representation in his study of Canada’s “monarchs of the quill” (3), The Four Jameses (1927), one of whom—James McIntyre (1827-1906)—was Kate McIntyre Ruttan’s father. The chapter “The Ladies: God Bless Them!” is thus included in Deacon’s curious text; it opens with Ruttan, but also includes two other equally unknown female poets: Anastasia Hogan and Lillian Forbes Gunter.

Ruttan’s poetry is rather parochial, as befits the daughter of James McIntyre, the “Cheese Poet.” McIntyre’s “Ode on the Mammoth Cheese” (“generally recognized as [his] masterpiece”) was composed in honour of “the ‘Mammoth Cheese’ that was sent to the World’s Fair at Paris” (Deacon 59). McIntyre subsequently wrote the “Oxford Cheese Ode”. Deacon notes of the two poems that “there is a sublimity in the lines on that single, gigantic cheese that the Oxford Ode does not quite equal…” (67). (The opening lines of the “Oxford Cheese Ode” are “The ancient poets ne’er did dream/That Canada was land of cream,” which obviously cannot compare with “We have seen thee, queen of cheese,/Lying quietly at your ease.” How does one inject ironic tone into blog posts, one wonders? There should be an icon…)

James McIntyre wrote poetry about and for his daughter; she reciprocated in kind: at least two of the poems in Rhymes, Right or Wrong, of Rainy River (1926) are titled or addressed to Jas. McIntyre. A number, too, are autobiographical, but still more are biographical, referring to famous and unknown individuals alike: there are poems for “Mrs. Rajotte,” “Dorothy Strachan,” and “Mable Lennix”; and “Sir John A. MacDonald” (no picture) follows directly after “My Daughter Maude” (with picture). Included below is a page spread with a set of poems—”Girls, Don’t” and “Boys, Don’t”—which parallel two earlier poems, “A Word to Girls” (12) and “A Word to Boys” (13).

Having read Mabel Broughton Billett’s The Robot Detective (1932), I was pleased to discover that the University of New Brunswick had a copy (apparently the only extant copy) of its precursor, Calamity House. I must say that I enjoyed Calamity House more than The Robot Detective, but that is perhaps because it is a more traditional detective novel, and I was somewhat underwhelmed by the inclusion of the robot “fact machine” in the sequel.

Calamity House presents the same attention to geographical detail as The Robot Detective, and the same careful and effective depiction of the nature around Merritt, BC—for Merritt is the setting, as I surmised from the geographical detail in The Robot Detective: the fictional Glenlogan lies at the junction of the Nicola and Coldwater rivers, which answers the question of location definitively. More than just curiosity, though, the significance of Merritt as the setting is made clear in a blog by Brodie Douglas on the Nicola Valley Museum and Archives site, in which he discusses a “haunted” house where, rumour has it, “George Tutill, a drug dealing doctor, murdered his wife and young child.” Douglas goes on to debunk the myth, but does note the story as the impetus for Billett’s 1927 novel, written only 4 years after Grace Tutill fell and cracked her head, dying from her wound. While Douglas titles his blog “Stranger than Fiction,” Billett’s novel is far more sensational than the truth seems to have been. Where Dr. Tutill was considered a drug-dealer for prescribing opium as a pain killer, Billett’s Dr. Townsend is evil through and through: crossed in love, he kills his lover’s first child and addicts her to heroin out of jealousy and spite; he drugs a young Native girl and rapes her, abandonning her in her pregnancy; later, he addicts his step-son in order to control the money left to the son by his murdered mother, the Doctor’s wife. There is no suggestion in Dr. Tutill’s story that such acts ever happened in Merritt, or anywhere; what I wonder is how often such occurrences were reported in newspapers of the time, if ever. My guess is that Billett had a rather over-fertile imagination; her plot at least supports those who argue against the notion of early twentieth-century “women’s novels” as mainly moral tales intended for the edification of society.