Just now a strange wind looked in in at my window,
Sighed down the chimney and rattled at the door.
He breathed his chilly breath in at my window
And a dead leaf flew in and settled on the floor.

Now, might and day, I hear strange voices crying,
through every silence their plaintive echoes throng;
I hear the little lilac bushes crying
And the great trees I hear lamenting all night long. 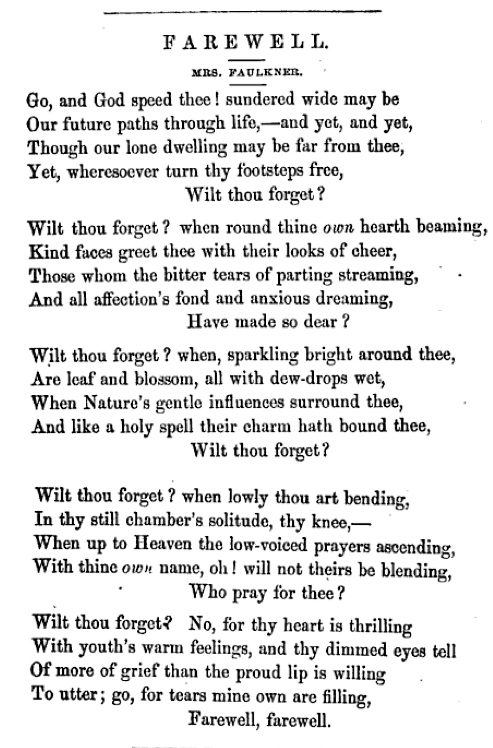 I have been working (and playing) in Toronto for the past week, and so have been remiss in posting poems.  So today I am posting two.

This poem was written by Mona Gould in the 1920s, but never published.  It is found in typescript in her papers at the Thomas Fisher Rare Book Library at the University of Toronto.  Mona Gould was a well-known radio personality in the 1950s, but published a great number of poems and articles in journals previous to her popularity as a radio interviewer.

It doesn’t matter now at all—
You really needn’t frown—
I tossed away the heart you broke
To wear a scarlet gown.

It hurt a little just at first—
But even pain will die—
I donned my little flashing shoes—
With heels three inches high.

O yes, sometimes I think of you—
Quite vaguely now and then—
It doesn’t matter, tho’, at all—
There are so many men. 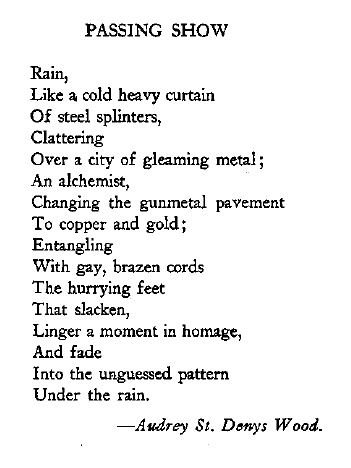 To know a song of songs in all the air,
And strive in vain to catch the echoes faint!
To love in truth, a flower surpassing fair,
Yet lose its perfectness with blind restraint!

To hate this darkness and to long for light,
Yet grovel closer to our shadowy earth!
Essay, with sparrow’s wings, the eagle’s flight,
What boon is knowledge of our own unworth?

The untold sweetness of the flower and song
Hath here a herald. A glad hope that we,
Rejoicing in full noontide, shall be strong,
Whispers the secret of futurity!

Haight, J. E. “At Evening Time It Shall Be Light.” Selections from Canadian Poets: With Occasional Critical and Biographical Notes, and an Introductory Essay on Canadian Poetry. Ed. Edward Hartley Dewart. [Montreal], 1864. 76-77.