There is a complete biography of Judge Chartres Brew in the Dictionary of Canadian Biography, but we of course are far more interested in the biography of the poet, Rebecca Gibbs, who was one of the first Black Canadian poets. We would be very grateful for additional information on her or any other Black early Canadian authors.

Here’s what we know about Rebecca Gibbs, much of it from the work of Crawford Kilian, who has done extensive research on the history of British Columbia, and has discovered a bit more about Rebecca Gibbs than any other of the sources I have found. A number of sources suggest that she was the sister-in-law of Mifflin Wistar Gibbs (1823-1915). In 1866, Mifflin Gibbs was elected to the Victoria City Council, making him as the first Black person to hold an elected position in British Columbia, the second in Canada, and the third in North America. His younger brother, Isaac P. Gibbs was apparently in Barkerville during the autumn of 1868, as Crawford Kilian notes that he was “one of the blacks who suffered losses in the 1868 Barkerville fire.” “Mrs. R. Gibbs,” we are told, “saved her things, but lost her house.”

Here Lies Rebecca Gibbs
Born in Philadelphia, USA
About 1808
Many years resident of Barkerville
Died in Victoria B.C.
14 November 1873
Laundress, Poet, Nurse
One of many black people who came to Canada to escape discrimination before the US Civil War.
Erected by the Victoria Black People’s Society & the Old Cemeteries Society

In Pioneers: Blogging the Black Pioneers of British Columbia, Crawford Kilian posits that, given that Isaac would have been about 20 years younger than Rebecca, it is unlikely that they were in fact husband and wife. I have to agree, especially when other Ancestry.ca family trees list this Rebecca Gibbs’s husband as a Richard Gibbs. I have found no proof for that association at all, but neither do I have any evidence of a marriage to Isaac Gibbs.

In the sparse copies of the Cariboo Sentinel held in the University of British Columbia Archives, I  found only two references to Rebecca Gibbs (and none to Isaac): on 29 September 1868, Rebecca Gibbs is one of the people commended for quickly rebuilding their establishments, “Phoenix like,” from the ashes of the fire that destroyed the town; and on 11 June 1870, Rebecca Gibbs published a poem in commemoration of Judge Chartres Brew, who died on 31 May 1870.

It was fabulous to find the poem, but what I really want is a definitive answer to the question: was Rebecca Gibbs related in any way to Mifflin Gibbs, who holds such a significant place in the history of our province? 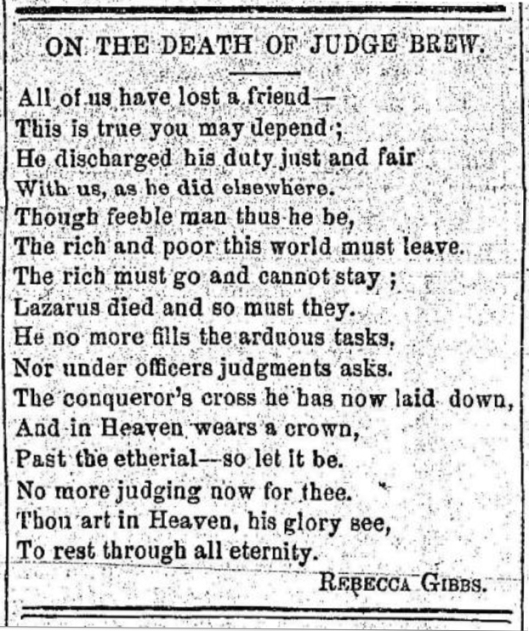 3 thoughts on ““On the Death of Judge Brew,” by Rebecca Gibbs”