If only everyone could reach such an age with the grace and joy you still radiate. 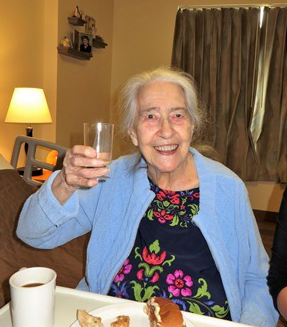 Exactly 100 years ago today, Beatrice Caroline Bunker— “Bea” to her family and friends—was born in Bromley, in the county of Kent, England. She immigrated to Canada with her mother in 1925, celebrating her 8th birthday the day before they landed in Montreal. Today, I’d like to celebrate her 100th birthday with a bit of biography and sharing of her work. 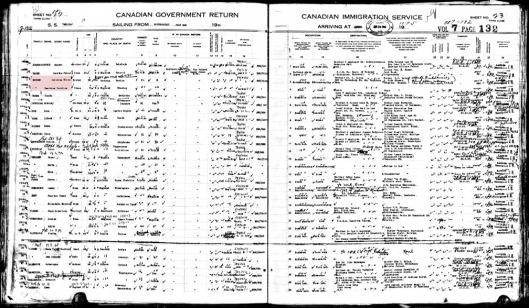 Curiously, on the ship’s manifest (above) Bea is listed as her mother’s “niece,” and they were travelling with her mother’s “brother,” Charles Francis Baker, aged 25; the family notes that Caroline did not have a brother, and no further information about this man is available. Perhaps this is all tied up with the difficulty Alfred Bunker, Bea’s father, had in immigrating. He was refused on medical grounds, and it was only after many years that Bea finally managed to convince the government to let him join his family in Canada.

As a teen, Bea lived in Winnipeg, MB, where she contributed her first poetry at the age of 15 to the Winnipeg Free Press’s “Young Authors’ Page,” using the pseudonym R.H. Grenville, which she would use for almost all of her published poetry. (I should note here that the Victoria Times-Colonist article below states 12, but other sources support our use of 15.) She worked as well as a reviewer for “The Page,” as she calls it, supporting other aspiring young Canadian poets. She continued to contribute to “The Page” once she had moved to Victoria, BC. On 21 January 1939, at the age of 22, she published the following poem, “In the Music Room”; the editor’s comments on this poem, a well as “… of Acadie,” her contribution the following week, praise her as an up and coming poet. 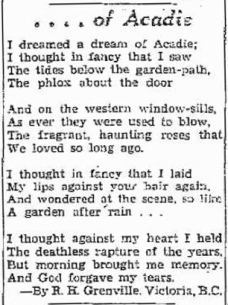 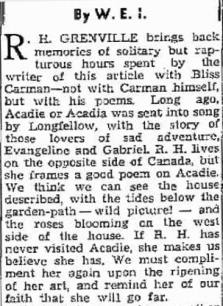 Some time in the 1930s, Bea met Frank Rowley, whom she married in about 1951; they were together until his death in 1987. Frank and Bea had two children: Frank Grenville and Catherine Elaine. 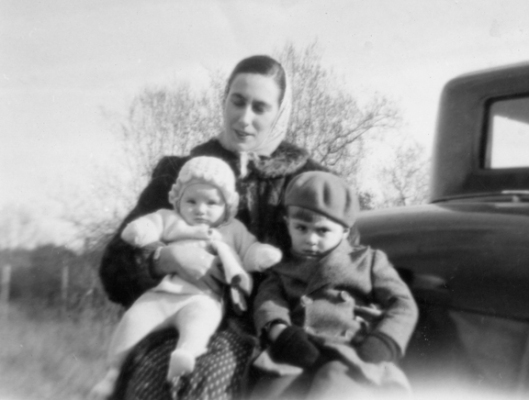 Their son Frank died in 2005, but Cathy still lives in Toronto, and has been instrumental in our learning about the life of her fascinating and prolific mother. Another relative who has shared with us even more of Bea’s life and work is her step-son, Charles Rowley, who lives in BC’s Lower Mainland. With his assistance—as Bea is somewhat reclusive now—we have been given permission to publish online a collection of miscellaneous poems, cards, and art work that Bea has sent to various members of her family over the years. Here’s a poem she included in a letter she sent to Charles in January of 2007. 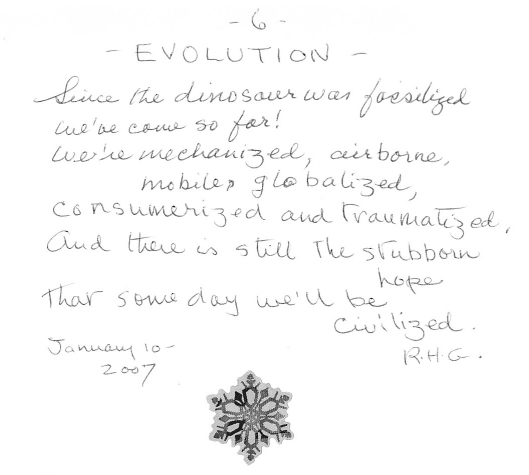 Bea’s repertoire contained not only writing but sketching and painting as well. Her cards to her family include some of her quick sketches, such as this delightful image of a family in the rain: 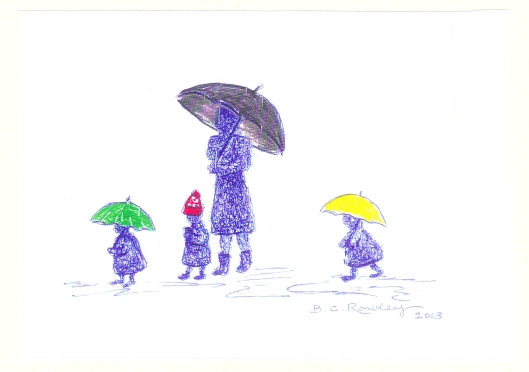 Fountain in the Square and much much more 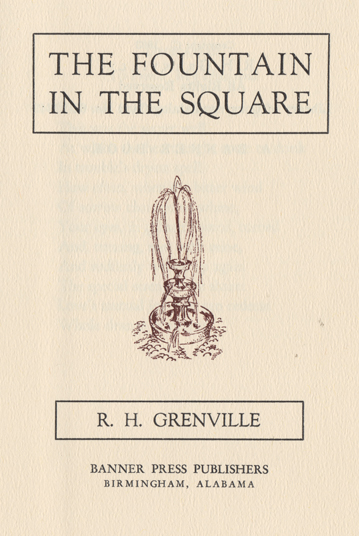 While Bea has only one published book—Fountain in the Square (1963)—she contributed poems to a number of magazines and newspapers in Canada and the United States, including the Saturday Evening Post, to which she contributed regularly between 1947 and 1961. While her primary genre is poetry, she has also contributed a number of short stories to journals such as The Friend magazine and the Women’s Journal. According to her family, repeated in the article below, she has contributed to upwards of 70 periodicals; we have verified 35, and are always willing to update our information if anyone knows of more!

Another monumental “100th” milestone for Bea occurred in 1956, when the Saturday Evening Post published their 100th poem by R.H. Grenville. This article appeared in the Victoria Times-Colonist in 1956.

Fountain in the Square (of which I now have an autographed copy: thank you so much Charles and Bea), was actually a strong impetus for the creation of this blog, as well as one of those serendipitous research moments that make academic life so rewarding. That story is part of an interview I gave with Kaarina Mikalson of the Canadian Writing Research Collaboratory, so I won’t repeat it here. I will say, though, that Beatrice Rowley has been an important author for our project on a number of levels since I first ran across her writing.

Searching for the right poem to include for this, her 100th birthday, I ran across this typescript in the files Charles lent me. It seems fitting, revealing as it does the author’s explorations of existential questions. 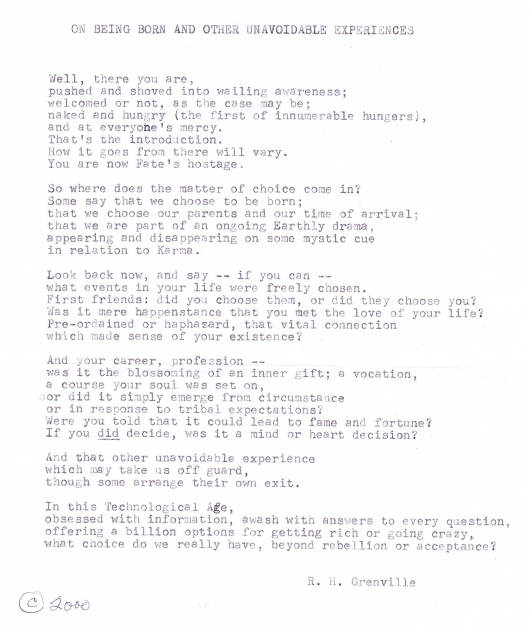