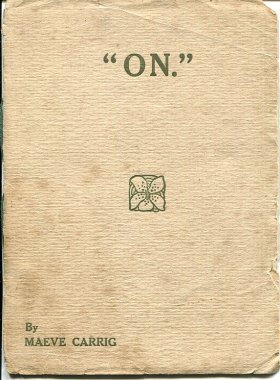 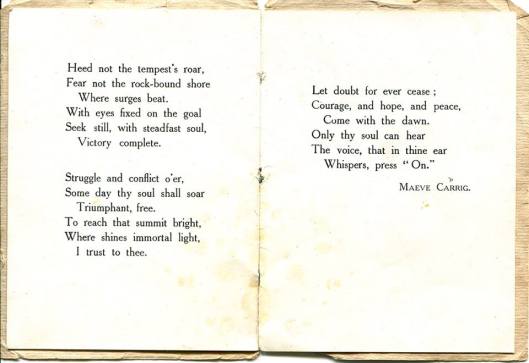 Martha Craig (1866-1950) was born 150 years ago yesterday. When we first discovered her, we had little information about her identity. Since then, we have gleaned and been given some surprising and extraordinary details about this little-known writer.

In addition to our own research, our primary source of information has been Nevin Taggart of the North Antrim Local Interest List, who has accumulated many sources that illuminate the life story of this fascinating writer, scientist, and lecturer on his blog.

We know that Martha Craig was born in Larne, in County Antrim (present-day North Ireland) in 1866. During her 84 years, she accomplished a remarkable range of achievements. A highly intelligent girl, her parents eschewed gender conventions and sent her to study in England and France where she developed an interest in the sciences. Craig ventured to North America, where she visited the Ketegaunseebee (or Garden River) First Nation. From this point onward, she identified herself using various Indigenous (or perhaps, more accurately, Indigenous-inspired) names like Enookwashooshah and Princess Yewagononee. Accompanied by two guides from the Naskapi Innu First Nation, she became one of the first women to explore Labrador. Craig gave lectures about her expeditions and published a chapbook (as Princess Yewagononee) called Legends of the North Land. Donning what many would now refer to as red-face, the writer chased a vision of Indigenous cultures that was seeped in fantasy.

From this point onwards, Craig’s life story took an especially curious turn. In 1905, she moved to Brooklyn; the New York State Census lists her occupation as “lecturer.” An article in the Amador Ledger (15 June 1906) entitled, “Girl’s Weird Story of Reincarnation,” describes a “Miss Martha Craig,” a “slender woman, young of pleasing face.” It goes on to detail a lecture that Craig delivered to the most learned men of New York City: “All life is a vibration,” she told the scientists, “Through this vibration, it is possible to separate the soul from the body, or to live continuously. Therefore […] it is a crime to die of old age” (“Girl’s Weird Story”). In a past life, Craig believed, she had been a “Canadian Indian Maiden” of Labrador named Meta.

Craig’s unusual theories drew some contemptuous responses from journalists, yet her ideas gained attention from members of the scientific community. In the late 1900s, Craig moved to Paris where she continued her scientific inquiries. Around 1907, she wrote a book called First Principles: A Manifesto of the Vortex Theory of Creation and subsequently became the first woman to lecture at the University of Salamanca in Spain. In addition to her scholarly pursuits, she was also an inventor and in 1914 designed an airship for the British Government. During the war, Craig served as a nurse on the French battlefields.

In Legends of the North Land, Craig took on the identity of Princess Yewagononee; in her chapbook On, she adopted another name, one that was closer to her own origins: Maeve Carrig seems to be, if not a direct gaelicization, at least a parallel version of “Martha Craig.” (Nevin tells us that Maeve, an anglicization of the Irish Meadhbh, is often used for Martha, and Carrig, itself an anglicization of Carraig [“rock’], used for Craig.) Craig’s chapbook was likely produced after she had returned to Ireland, following the First World War. Perhaps she sought a quieter, more stable life in her home country; however, post-war Ireland was shaken by its own troubles. Like Legends of the North Land, On speaks to Martha Craig’s complicated identity as well as her strong sense of perseverance.